Video as Evidence and the Arab Spring: Seven Years On

By Raja Althaibani, WITNESS Program Manager for the Middle East and North Africa

It doesn’t feel like long ago that the first shaky videos of the Arab Spring were uploaded to the Internet.

First it was young Tunisians—protesting for the rights of young men like 26 year old Mohamed Bouazizi, who set himself on fire when he was arrested for selling fruit, the only way he was able to make a living to support his family. A few days later, Egyptians began sharing images of Khalid Said–a young man who died in police custody in Alexandria, when police tortured him to death for being in possession of video evidence that implicated the police in a drug deal. The video showed evidence of corruption; the images, of the brutal torture that the regime was capable of. Both inspired a movement that led to the end of Hosni Mubarak’s thirty year rule and a new dawn for Egypt.

Libya, Bahrain, Yemen and Syria quickly followed suit. Young people filming demonstrations on their smartphones—and then sharing them on social media as a call to action—became so ubiquitous that terms like “Facebook protests” and “Twitter revolutions” were thrown about to characterize the technology-savvy uprisings.

But soon this form of documentation started to play another role. As the regimes cracked down on the protests, many of the activists turned their cameras towards the security forces, documenting the tear gas, beatings and bullets that were injuring, and killing their comrades. Like the images of Khalid Said’s maimed body, the viral videos that once catalyzed the revolutions were no longer just about demanding change; they were also demanding accountability.

Seven years later, it is difficult to remember the optimism that once galvanized a movement across the region. The death of Libyan dictator Muammar Qaddafi has left behind a political vacuum that devolved into militia-governed chaos. Egyptians—who originated the “Facebook protests” now face Internet surveillance and censorship so extreme that many are wary of communicating—much less, organizing—using online platforms. Yemen and Syria’s uprisings became full-scale wars.

Still, the importance of documentation remains constant. Syrian activists who have spent the past seven years documenting the regime’s crackdown on their demonstrations—and then the barrel bombs, chemical weapons attacks and massacres that came after—are now being approached by international media outlets and human rights organizations to see if their videos can be part of an effort to support investigations, advocacy, and eventually even hold war criminals accountable.

But it isn’t only the activists who are using video. Governments have used video to discredit activists—such as the Egyptian court that showed a video of Egyptian activist Ala’a Abdel-Fateh’s wife belly-dancing in their home, to indict him on charges of participating in civilian clashes in front of the Shura Council building during protests in 2013. Extremist groups such as the so-called Islamic State uploaded countless videos of their own group, beheading civilians and pillaging ancient artifacts from Syria.

As a result, we are overwhelmed with video footage—on YouTube there are more hours of documentation of the Syrian conflict than of the Syrian conflict itself. It got so extreme that YouTube tried to flag, and in some cases, remove, the often violent content—a policy that many activists, including our partners, Syrian Archive, fought. Legal systems around the world have been largely under-equipped to handle the influx of footage made possible by today’s mobile technologies; and, simultaneously, the power of citizen witnesses to capture video for social change and evidence remains largely unrealized.

In an effort to strategize effective ways to use video evidence as a tool to defend and advance the public interest, PILnet and WITNESS organized a training on how to make use of such resources in legal proceedings. The training took place in Morocco in December 2015, bringing together human rights advocates from across MENA. While participants recognized the value of video evidence, many of them were unfamiliar with the question of how different jurisdictions can use video evidence in their respective legal settings.

Our goal is that the Video as Evidence Field Guide (available in Arabic), and the Video as Evidence in the Middle East & North Africa report—released in collaboration with PILnet—will bridge existing gaps so that citizens, activists, and lawyers can better work together in using video for justice.

Read this in Arabic. 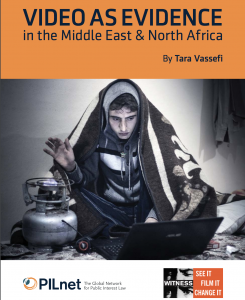