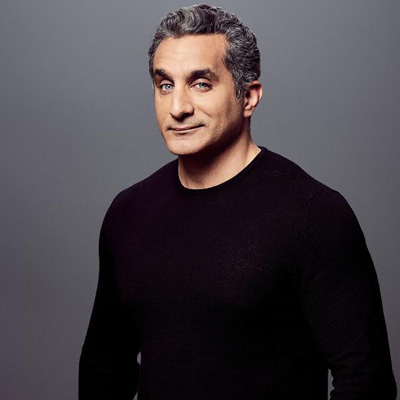 Bassem Youssef is an Egyptian comedian, writer, producer, surgeon, physician, media critic, and television host. His groundbreaking political satire YouTube show, AlBernameg, eventually became the first online series to make its way to national television in the Middle East becoming the most watched program in the region with nearly 30 million viewers tuning in each week.

Dubbed the “Jon Stewart of the Arab world,” an arrest warrant was issued for Youssef in 2013 for his outspokenness on ruling powers in the region and other content deemed controversial on his show. Regardless, he even hosted Jon Stewart himself as a guest before AlBernameg was cancelled due to political pressures.

Since then, Youssef was featured as The Daily Show’s senior Middle East correspondent, has been named one of Time Magazine’s most influential people, been awarded the International Press Freedom Award by the Committee to Protect Journalists, written a book about his experience, and has gone on to serve as a resident fellow at the Institute of Politics at Harvard University’s John F Kennedy School of Government and voiced characters in Disney’s reboot cartoon series “DuckTales”.

Before his foray into comedy and political satire, Youssef majored in cardiothoracic surgery, passed the United States Medical License Exam (USMLE) and is a member of the Royal College of Surgeons (MRCS).