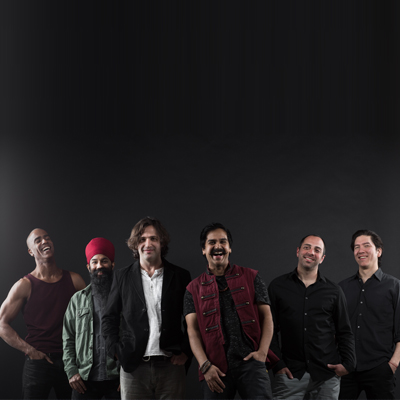 Red Baraat is a pioneering band from Brooklyn, New York. Conceived by dhol player Sunny Jain, the group has drawn worldwide praise for its singular sound, a merging of hard driving North Indian bhangra with elements of hip-hop, jazz and raw punk energy.

The release of their second album, Shruggy Ji, in 2013 debuted at #1 on the Billboard World Music charts in the U.S. They’ve played venues as diverse as the Luxembourg Philharmonic, New York City’s Bowery Ballroom, and performed at the request of the Obama White House, TED and the Olympic Games.

In 2018, the band toured Kazakhstan, Abu Dhabi, the US, Canada, Europe in support of their 5th album release, Sound The People. They headlined the WOMAD Festival in Cáceres, Spain, performed at the Vienna Konzerthaus, and had the crowd jumping at Rudolstadt Festival in Germany.

Red Baraat communicates with their audience in a joyful, near hedonistic celebration of music and dance, drawing crowds even more diverse than the players on stage.