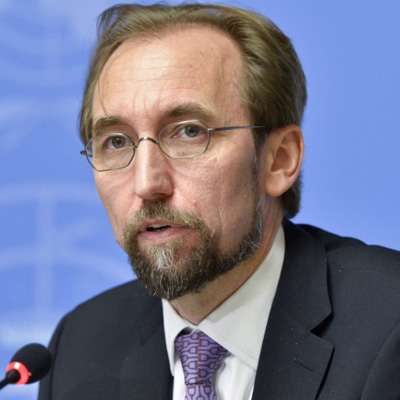 Zeid Ra’ad Al Hussein is the former UN human rights chief who has been recognized worldwide as a leading and outspoken defender and promoter of universal human rights. He was also awarded the Stockholm Prize for Human Rights in 2015 and the Tulip Prize in 2018.

With a professional background as a practitioner – a former senior diplomat representing his country Jordan – his knowledge is steeped in the global security environment, stemming from over twenty years of direct exposure to many of the world’s most turbulent crises and serious security threats.

He served as president of the UN Security Council (in January 2014) and in 2002 was elected the first president of the governing body of the International Criminal Court (ICC) — guiding the court’s growth in its first three years (9/2002-9/2005). He chaired some of the most complex legal negotiations associated with the court’s statute, in particular, those relating to the elements of crimes (1999-2000) and the crime of aggression (the “supreme international crime”) from 2009-2010. He also led the international community’s efforts in countering the threat of nuclear materials being trafficked and then used maliciously by terrorists (2010-2014).  And he led the UN’s efforts at eliminating sexual exploitation and abuse in UN peacekeeping (2004-2007).

He was twice served as Jordan’s ambassador to the United Nations (in New York) and once as Jordan’s ambassador to the United States (2007-2010). He also represented Jordan twice before the International Court of Justice (ICJ). From 1994-1996, he was a UN civilian peacekeeper with UNPROFOR. He has degrees from Johns Hopkins and Cambridge universities and is an Honorary Fellow of Christ’s College, Cambridge University.