Mastering Depth of Field With Your DSLR

The DSLR (digital single-lens reflex) camera has increasingly become the weapon of choice for many human rights activists. These cameras, once used exclusively for photography, have been replacing the traditional video camcorder in popularity ever since the first video DSLR was released in 2008. As the video producer at WITNESS, I have seen the challenges activists face using DSLRs in very fast paced shooting situations (See an example of our Cambodian partners, LICAHDO tackling this challenge while covering an evolving story). Switching from a camcorder to a DSLR comes with a pretty steep learning curve and these cameras are notoriously difficult to shoot documentary video with, so why are they so popular? 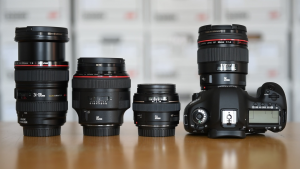 The lens you use will have an effect on your image’s depth of field.

The appeal of DSLRs comes from their amazing picture quality that rivals that of much more expensive professional camcorders. DSLR camera’s large sensors and quality optics create a unique “DSLR look” that has been an emerging  trend in narrative and documentary video within the past decade.

The “DSLR look” is characterized by a shallow depth of field as shown in these examples.

A contributing factor to this look is the DSLRs ability to shoot a very shallow depth of field, which lends a film-like quality to its video. This stylized approach works well in controlled filming scenarios, such as when filming interviews, but is not always suited for the more guerilla-style filming often utilized when documenting human rights abuses. Chasing that shallow focus look while filming on the run will often result in unusable video. The most common problem I come across when editing DSLR footage is the picture is constantly moving in and out of focus with key shots too blurry to incorporate into the edit.

For activists wanting to use video for evidentiary purposes, where the goal is to capture as much detail as possible, shooting with a shallow focus is counterproductive. Just as these cameras can capture a shallow focus effect, they can also capture a very deep depth of field that is ideal for filming the size and movement of a protest, capturing a badge number in a crowd, or documenting the aftermath of a bombing.

Knowing how to control your camera’s aperture is essential for shooting with a DSLR.

The first step for beginner DSLR video-makers, especially if they’re new to photography, is to get a basic understanding of depth of field and know how to control it. Anticipating the effect of the lens you are using, your camera’s aperture and the distance from the camera and your subject will have on your image is key. We created the short video above to provide tips and examples to help activists who are new to shooting with a DSLR.

For more resources and guides on filming for human rights, please visit library.witness.org. For additional blog posts on video tips, check out our How-To section.

This resources is part of WITNESS' 8 Resources for Video Storytelling, a package of materials to help filmers safely and ethically document human rights abuse.