While today’s mobile technology has enabled millions upon millions to be video witnesses, a special group of people purposefully put their lives at risk to document human rights abuses, bring those images and stories to light, and affect change. Focus For Change is our small part to honor them.

“With cameras everywhere, we can document and share what is really going on,” said WITNESS Co-Founder Peter Gabriel in opening remarks to the evening. “We can build campaigns with millions — even billions — of others, and we can leverage those numbers to create real change.” 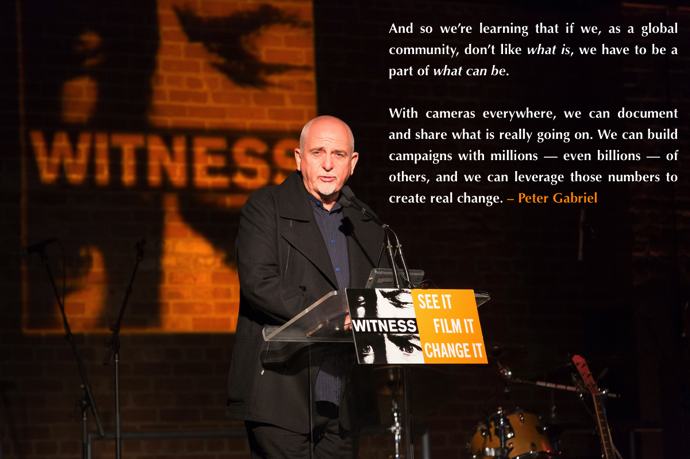 WITNESS has trained activists for over 22 years in safe filming techniques and how to create videos that can drive positive change. Take Rami Jarrah, an award-winning citizen journalist from Syria and this year’s Focus For Change special guest.

Rami became active in Syrian protest groups early in 2011. He quickly became a trusted spokesperson and was interviewed frequently by international media. He also spoke out via social media using the pseudonym Alexander Page for about six months before his identity was discovered by the Al Assad regime and he narrowly escaped Syria. Rami co-founded the Activists News Association (ANA) to help professionalize citizen journalism efforts in Syria and elsewhere in the Middle East. ANA organizes video databases, circulates citizen reports to the media, human rights organizations and the International Criminal Court.

Visa issues kept Rami from joining us in New York but in prepared remarks he had this to say:

When brutal things happen in far-off places, they are hard to imagine. Even for me, having seen the atrocities in Syria myself, the brutality is sometimes beyond my grasp.

But thanks to media activists, we do not have to imagine. Thanks to the millions of ordinary people who are filming what is happening: We can ALL witness.

And once you are a witness, you feel an urge to do something. I believe all people share that urge. It is why we flood the streets and join protests. It is why we pick up cameras when we see persecution.

It is why we are all here tonight. We know our neighbors are suffering, and so we come to celebrate the courage of those who are telling us their stories.

“I am speaking on behalf of all of us at WITNESS,” said Yvette Alberdingk Thijm, WITNESS Executive Director, “when I say it is people like Rami, the men and women we work with, who inspire us every day.”

More About Focus For Change

Visit Focus For Change for photos and other coverage of the event. Read Rami’s complete remarks on the WITNESS Blog. And, importantly:

Thank you all for attending tonight in support of @witnessorg – See it. Film it. Change it. #WITNESSLive pic.twitter.com/IH1GGkBR44