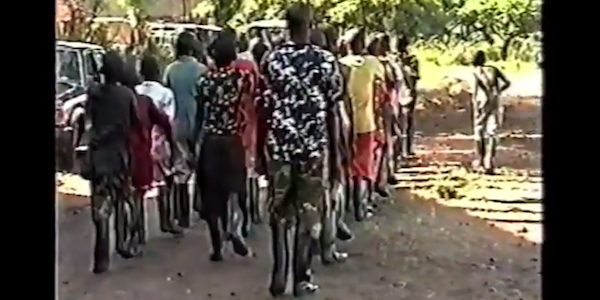 A Warlord Behind Bars

In the long running civil war in the Democratic Republic of Congo (DRC), children as young as eight years old were used as soldiers. Congolese activist Bukeni Waruzi filmed the children’s stories, and with WITNESS’ support produced two videos. These videos were part of a 14-year struggle to ensure rights and rehabilitation of child soldiers in DRC.

Together we pressured the International Criminal Court (ICC) to bring charges against Thomas Lubanga, a well-known Congolese warlord. The videos co-produced by Bukeni and WITNESS were used to sensitize the court to the experiences of children recruited for warfare.

On March 14, 2012, the ICC found Lubanga guilty of the war crime of using children in armed conflict. This was the first-ever ICC verdict. Video footage played a role at the trial. “We were unable to dispute the visual images or deny the sound,” said Honorable Mr. Justice Fulford, ICC Presiding Judge, “the evidences presented to us were credible and outstanding.”

After partnering with WITNESS for several years, Bukeni spent seven years working for WITNESS leading our programs in Africa & the Middle East. He now serves as a member of our Advisory Board. Watch more of Bukeni’s story:

Image: Still from A Duty to Protect: Justice for Child Soldiers in the Democratic Republic of the Congo (DRC)