WITNESS is a proud Charity Partner of the TCS NYC Marathon for the 6th year in a row! For the 2016 race, we’ve brought together 5 incredible runners, ranging from an immigration lawyer to an archivist, who are dedicated to WITNESS’s cause and the pursuit of human rights.

Every couple of months we will be profiling a runner to share a little bit about them, their regimen, and why they chose to support WITNESS. Here’s what our first runner, Carolina MacWright, an immigration lawyer and artist, had to share about her history with running and human rights: 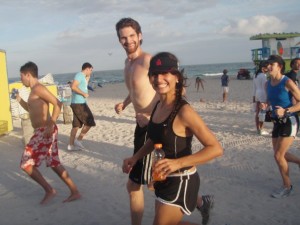 Why did you decide to run the 2016 marathon?

Last year, I had the opportunity to run the NYC marathon. It was the best race I have ever ran. It was so incredibly inspiring to see all the athletes that worked so hard to fundraise for all the different causes. I decided the next time I ran the NYC marathon, I would fundraise for a cause that was close to my heart. Brooklyn was the borough with the most heart, so I decided I wanted to find an organization based in Brooklyn.

Why are you running for team WITNESS?

Finding a local organization fighting for a cause close to me was my main target. WITNESS fit the bill perfectly, as fighting for Human Rights has always been in the forefront of my life. The change that comes about when empowering people and giving them a voice, is truly one of the biggest gifts you can give someone. The time for change is now, as technology is allowing us to have multiple eyes in order to share human rights abuses around the world and bring about the necessary justice for those that couldn’t otherwise prove these unfair events. I feel passionate about all the work WITNESS has done and is currently doing worldwide.

How are you preparing for the race?

Running has been part of my life since I can remember, but most especially since I moved to this country. For my family, running became a sort of coping mechanism when we moved to the U.S. so we do a lot of races together and we all run every day. However, I am trying to dedicate my longer runs to different struggles and causes around the world and using those documented runs as a means to inform people of the work WITNESS does in order to make people aware of these problems as well as help raise funds. 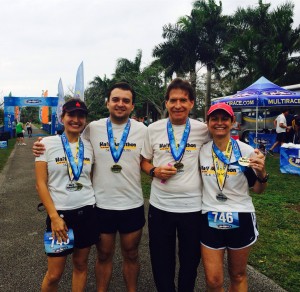 What keeps you motivated to train?

We live in a beautiful world, which is the world I like to share with my two small children, but behind the curtains the world is not so shiny. Growing up in Colombia, I got to see a lot of what goes on behind those curtains.  What I saw motivated me to not only become an immigration lawyer here in the U.S., but also a visual artist. Running allows me to digest the information about these abuses so that I can transform it into artwork.  Running in the streets of NY, which carry so much history, is also something very powerful for me.

My favorite run includes going across the Brooklyn Bridge. The history of the completion of the bridge is extremely inspiring to me. The chief engineer of the bridge fell sick and for 14 years, his wife, Emily Roebling took charge. She basically convinced the board to let her take charge, so she did and continued until it was done. On opening day, she was honored and the bridge was said to be a monument and testament to her capacity and her devotion to a higher education that she was not privy to. She was astounding. So essentially a woman without formal education, finished the Brooklyn Bridge.

Help Carolina pursue her passion for human rights and running by donating to her campaign for WITNESS!