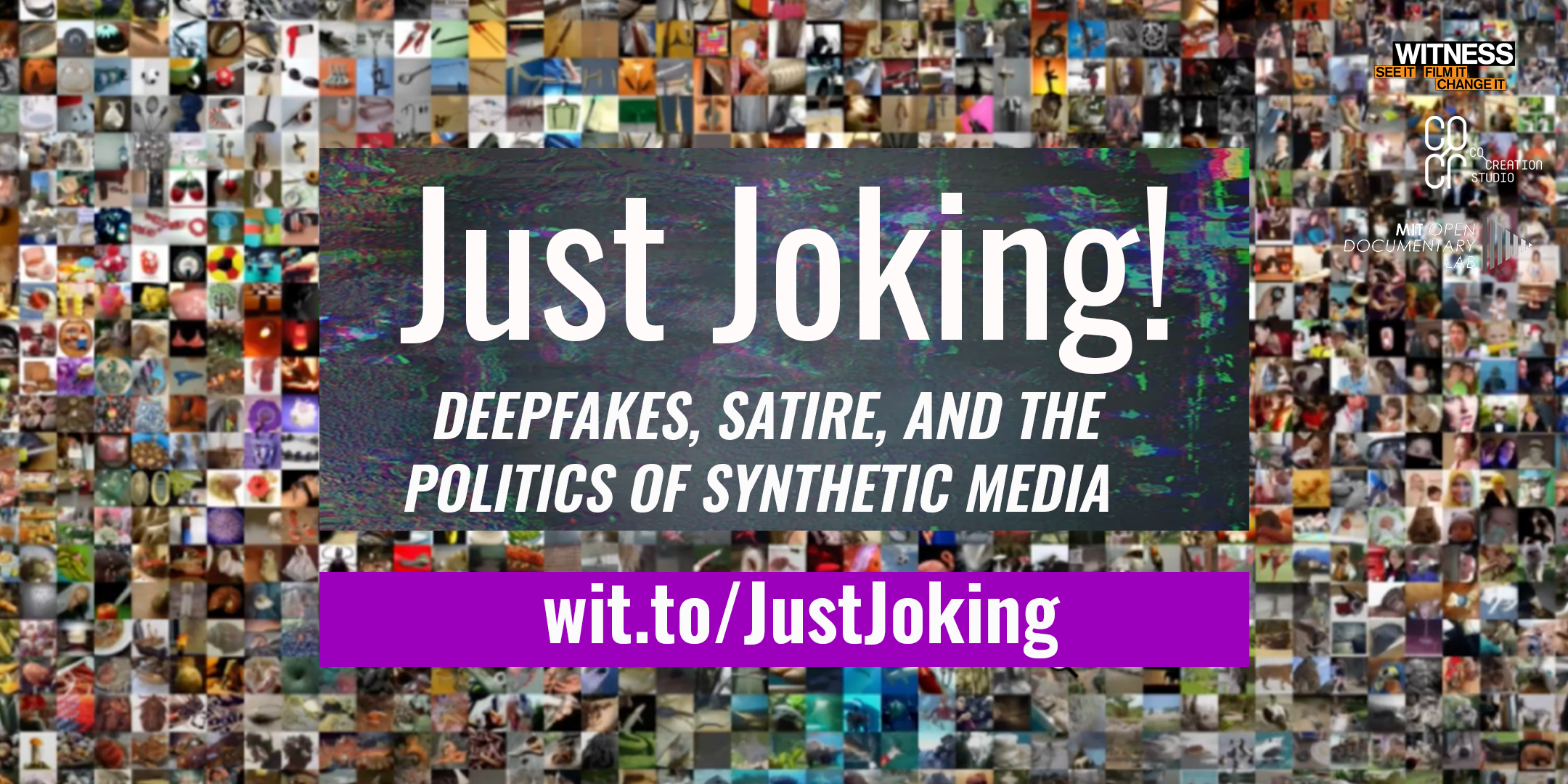 WITNESS is pleased to announce the launch of a new report called JUST JOKING! Deepfakes, Satire and the Politics of Synthetic Media in partnership with MIT Open Documentary Lab’s Co-Creation Studio. The report is part of WITNESS’ global “Prepare, Don’t Panic” initiative on deepfakes and manipulated media. It is also the latest in  a series of efforts to drive dialogue and action on critical questions around deepfakes, parody, and malicious disinformation.

Around the world deepfakes are becoming a powerful tool for artists, satirists, and activists. But what happens when vulnerable people are not “in on the joke,” or when malignant intentions are disguised as humor? JUST JOKING! focuses on the fast-growing intersections between deepfakes and satire. Key questions explored in the report include: who decides what’s funny, what’s fair, and who is accountable?

“WITNESS knows the power of video to challenge rights abuses and the powerful. But our research over the last three years has revealed the lines where deepfakes are misused, and claims of humor disguise gaslighting and malice,” said WITNESS’ Sam Gregory, a co-producer of the report. “We’re in a critical moment to ensure we have a robust conversation about protecting the creative, political power of deepfakes satire and other emerging forms of critique. At the same time, we must demand consistent approaches from platforms, app-makers and others who are implicated in the creation and distribution of deceptive and malicious digital forgeries that masquerade as ‘just joking!’”

“A wide range of voices need to be part of answering these deep questions,” said Katerina Cizek, the Co-Creation Studio producer of the report, “These questions arise in the cracks and overlaps between satire and disinformation. Voices who need to be at the table include not only technologists, lawyers and politicians, the platforms – where these videos are shared and where they are made–but also human rights activists, artists, journalists. Most importantly, perhaps, we must hear from people from around the world who are both finding new uses for these technologies, as well as have a profound understanding of the impact and harm that vulnerable communities face when malicious actors and institutions are not held accountable.”

JUST JOKING! analyzes more than 70 recent, wide-ranging cases of deepfakes. Some are examples of potent satire, art, or activism, from mocking authoritarian leaders to synthetically resurrecting victims of injustice to demand action. But others demonstrate how bad actors use comedy as both a sword and a shield, to glorify the powerful and attack marginalized communities, while seeking to escape culpability. Increasingly, satire is used as a defensive excuse — “just joking!” — after a video has circulated and caused harm.

JUST JOKING! is part of a continuing collaboration between Co-Creation Studio at MIT Open Documentary Lab and WITNESS on the Deepfakery project. WITNESS’ “Prepare, Don’t Panic” initiative pursues a globally-inclusive, human rights-lead approach to deepfakes, authenticity, and media manipulation. The report is written by deepfake experts Henry Ajder and Joshua Glick, based on the lead research of Henry Ajder.

For more information or to request interviews with the report’s producers, email media [@] witness [dot] org.