While the election of Donald Trump will pose significant setbacks for everyone working in the field of human rights and social justice, we remain committed to supporting people to use video as a tool for documentation and advocacy. And we know that support is needed right now. The Southern Poverty Law Center (SPLC) has documented over 700 acts of hate across the United States since the presidential election on November 8th.

WITNESS is doubling down on our work in the U.S. We are continuing our support of people documenting police violence, and we are expanding to support at-risk groups such as immigrants, refugees and LGBT communities to use video as a tool to expose abuses and amplify personal narratives.

Right now, we know that people are witnessing and reporting acts of hate. Below we share tips to documenting these acts more safely and effectively. Filming hate can expose abuse, substantiate reports, deter violence and serve as evidence.

We also encourage you to check out these resources from the SPLC: Ten Ways to Fight Hate – A Community Response Guide and the ACLU: Feel like you’re at risk?

If you witness a hateful act, let the victim know you are there to help. If you feel that filming could make the situation worse, don’t do it. 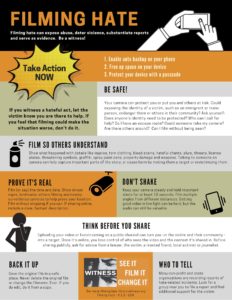 Your camera can protect you or put you and others at risk. Could exposing the identity of a victim, such as an immigrant or trans person, endanger them or others in their community? Ask yourself: Does anyone’s identity need to be protected? Who can I call for help? Do I have an escape route? Could someone take my camera? Are there others around? Can I film without being seen?

FILM SO OTHERS UNDERSTAND

Show what happened with details like injuries, torn clothing, blood stains, hateful chants, slurs, threats, license plates, threatening symbols, graffiti, spray paint cans, property damage and weapons. Talking to someone on camera can help capture important parts of the story, or cause harm by making them a target or revictimizing them.

Film (or say) the time and date. Show street signs, landmarks, others filming and nearby surveillance cameras to help prove your location. Film without stopping if you can. If sharing online, include a clear, factual description.

Keep your camera steady and hold important shots for at least 10 seconds. Film multiple angles from different distances. Getting good video in low light can be hard, but the audio can still be valuable.

Uploading your video or livestreaming on a public channel can turn you – or the victim and their community – into a target. Once it’s online, you lose control of who sees the video and the context it’s shared in. Before sharing publicly, ask for advice from a lawyer, the victim, a trusted friend, local activist or journalist.

Many non-profit and state organizations are recording reports of hate-related incidents. Look for a group near you to file a report and find additional support for the victim.

Download these tips here and learn more about filming safely and effectively at library.witness.org. Also available in Arabic, Portuguese and Spanish.