On Thursday, March 22, we co-organized a protest in front of the Brazilian Consulate in New York City to show our support for a fair, impartial and thorough investigation into Marielle Franco and Anderson Pedro Gomes’ assassination. We were joined by Jewish Voice for Peace-New York City, BRADO-NY, Defend Democracy Brazil and fellow protesters representing at least 15 countries from Fiji to Kazakhstan, Brazil, Mexico, France, Honduras, the United States and more. Together we invoked Marielle’s campaign slogan taken from the Ubuntu philosophy of humanity: Eu sou porque nós somos/ I am because we are. 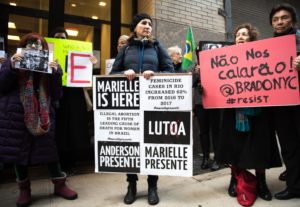 Just over a week ago, Marielle and her driver Anderson, were murdered following an impassioned speech Marielle had just given at Rio de Janeiro’s city council where she served as the only black female member.

WITNESS joins the global outpouring of grief and solidarity in the pursuit of justice for Marielle, Anderson and our allies in communities that live with and work to expose impunity of state violence daily. Just days after Marielle was assassinated, we heard from our partners at Coletivo Papo Reto that a 2-year-old boy named Benjamin, along with a woman and a man, had been killed by police bullets during an operation in Complexo do Alemão, a network of favelas in north Rio. 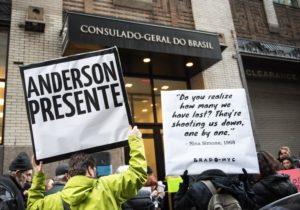 Marielle and voices from the favelas such as Coletivo Papo Reto actively work to counter harmful narratives about their communities as places that are plagued by drug trafficking and violence. As we heard from Raull Santiago, a founding member of Papo Reto, in September, “the reality in Brazil is that a person is killed several times. First, they are killed by the actual bullet. Then, they are killed by the media narrative, which parrots the police version of events by describing that person as criminals and assassinating their reputation. And finally, they are killed by the legal systems that fail to hold perpetrators accountable.” Video is one of the most powerful tools to fight this impunity– as evidenced by the impact that Papo Reto has accomplished.

A black, lesbian single mother, born and raised in a favela, Franco was a rare face of representation in an overwhelming white and male political landscape. And with two degrees from one of Brazil’s most elite universities and over a decade of experience in politics, she was an undeniably powerful charismatic force in the growing movement to confront the epidemic of violence perpetrated or perpetuated by the state. – The Intercept

Marielle denounced the thousands of police killings that take place in Brazil each year (the last official count for 2016 in Rio de Janeiro alone was 920 people killed by police, but human rights groups say the number is likely higher) and whose victims are a majority black and poor. She was killed, but her voice has not been silenced as the #MariellePresente (Marielle is here) movement continues to grow.

[All photos by Leandro Justen]