The killing of Walter Scott by a police officer in North Charleston, South Carolina, has fueled further debate over excessive force by law enforcement across the United States. It’s also driven home how witnesses’ recording of a crime can be used as a tool for justice. 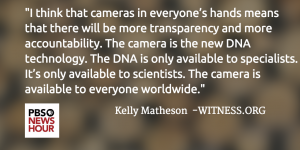 PBS NewsHour’s Hari Sreenivasan reports on how the proliferation of camera phones and social media have given new power to documenting wrongdoing. Challenges remain, but our video as evidence program hopes to educate video activists to give their footage the best possible chance that it will be submitted as evidence in courts.

Our training teaches video verification and shares tactics with citizens and justice groups. For example, our basic practices for video as evidence includes how to improve video-making skills and manage video files so citizen witnesses know what to do after they have recorded a video.

Read the transcript from the PBS NewsHour segment here.