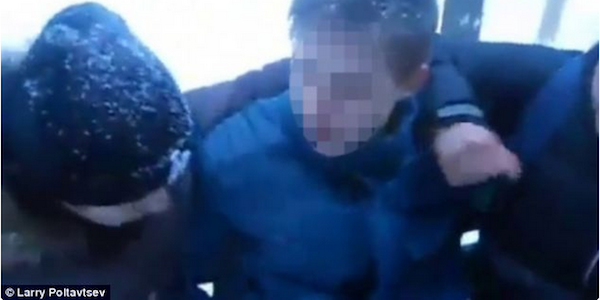 “Say hi to your mom. You will be an Internet celebrity.” With these words, a pack of Neo-Nazis publicly taunted and tortured a Russian teenager—outing him to the entire world in a country where it is illegal to be gay. The perpetrators intended to share this humiliating 20-minute video widely. They got their wish—but the dialogue they started would ultimately undermine their cruel intentions, instead creating a powerful impetus for change.

The Russian activist group LGBT Guide asked WITNESS’ Human Rights Channel (HRC) to review the video, which revealed the victim’s identity. In response, WITNESS contacted the uploader—an LGBT activist who wanted to spread awareness about homophobic violence in Russia—and encouraged him to use YouTube’s Face Blur function to prevent further re-victimization. Our HRC Curator, Madeleine Bair, wrote a blog post about the importance of visual anonymity and reached out to media outlets that had embedded the original video on their site. After WITNESS staff contacted several media outlets, Gawker Media and the Huffington Post subsequently replaced the videos they had published with the newly anonymized version, which concealed the victim’s identity. Building off of this momentum, PBS’ MediaShift reposted the blog, and HuffPo Live aired a segment that included Madeleine as an on-air expert speaking about the importance of visual anonymity.

With video-enabled mobile phones now in the hands of billions, and online video exposing everything from chemical weapons use in Syria to LGBT abuse in Russia and police brutality in Illinois, the need for tools, strategies and policies to enable the effective and safe use of citizen video has never been greater. While our outreach was too late to make a difference for this teenage boy, his story illustrates the unprecedented opportunities and challenges that video technology presents—and WITNESS’ efforts to confront those challenges with proactive solutions. WITNESS and the HRC are internationally trusted leaders. We instigated and influenced the implementation of YouTube’s Face Blur function in 2012, highlighting the importance—and far-reaching impact—of working with technology companies to make products safer for human rights activists.