Filming these encounters on a cellphone or other device, if possible, can help expose illegal activity and human rights abuses committed by ICE officers, deter violence, substantiate reports and serve as evidence. However, if footage isn’t captured and/or shared safely and ethically, there can be unintended harm to both the person being filmed and the person filming.

Join our webinar to learn more about the opportunities and perils for filming ICE, and how to safely, ethically and effectively document encounters. Register to attend #EyesOnICE here!

Stay tuned for information about our next webinar on July 18th that will cover community responses to ICE and documentation efforts already being deployed.

For general Know Your Rights information on encounters with ICE, check out IDP’s website (available in multiple languages). And check out our tip sheet for filming ICE below (also available in Spanish). 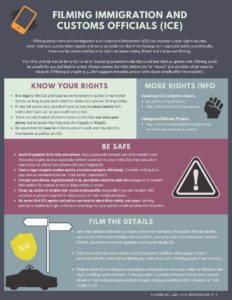 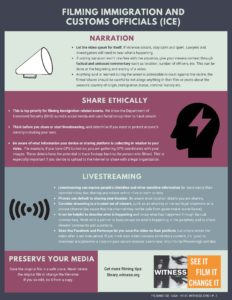 Michelle Paris is the Staff Attorney, Training & Resources Director at IDP. She brings to the work several years as a public defender in the Criminal Defense Practice at The Bronx Defenders, where she developed a keen understanding of the challenges of representing immigrant clients. Michelle was previously awarded an Equal Justice Works Fellowship focused on indigent defense for defendants with mental health issues. Michelle is a graduate of Stanford Law School where she was a student attorney with Stanford Law’s Immigrants’ Rights Clinic. She was also Board Member of the Stanford Black Law Students Association, a coordinator and translator for the Housing Pro Bono Program, a Juvenile Detention Facility Teacher for Street Law, an Editor for the Stanford Journal of Civil Rights and Civil Liberties, and a member of the Stanford Latino Law Students Association.

Palika Makam is the Program Coordinator for WITNESS’ US work. She supports activists and communities to use video safely, ethically and effectively to document human rights violations involving police and immigration officials, and protect the rights of LGBTQ, minority, indigenous and vulnerable communities around the country. Palika brings to the work several years of training activists to use video for change in New York, Ferguson, Cape Town and The West Bank. Media she’s helped produce has been used as evidence in human rights abuse court cases, utilized for human rights campaigns, and screened in classrooms and at the UN. Palika was previously awarded an Emerging Activist Fellowship with The Social Change Initiative. She holds a BA in Journalism and Social and Cultural Analysis from NYU, and MA in International Development concentrating in human rights and media from The New School. She is a board member of The Truth Telling Project based in Ferguson, MO, and a youth board member of the ACLU Illinois Chapter.

Update: WITNESS would like to thank the Immigrant Defense Project and the over 300 people that logged on for the Eyes on Ice Webinar on June 13th. If you were unable to catch the webinar live, video and audio from the full presentation has been made available below via WITNESS’ YouTube. Find additional resources from the webinar here.